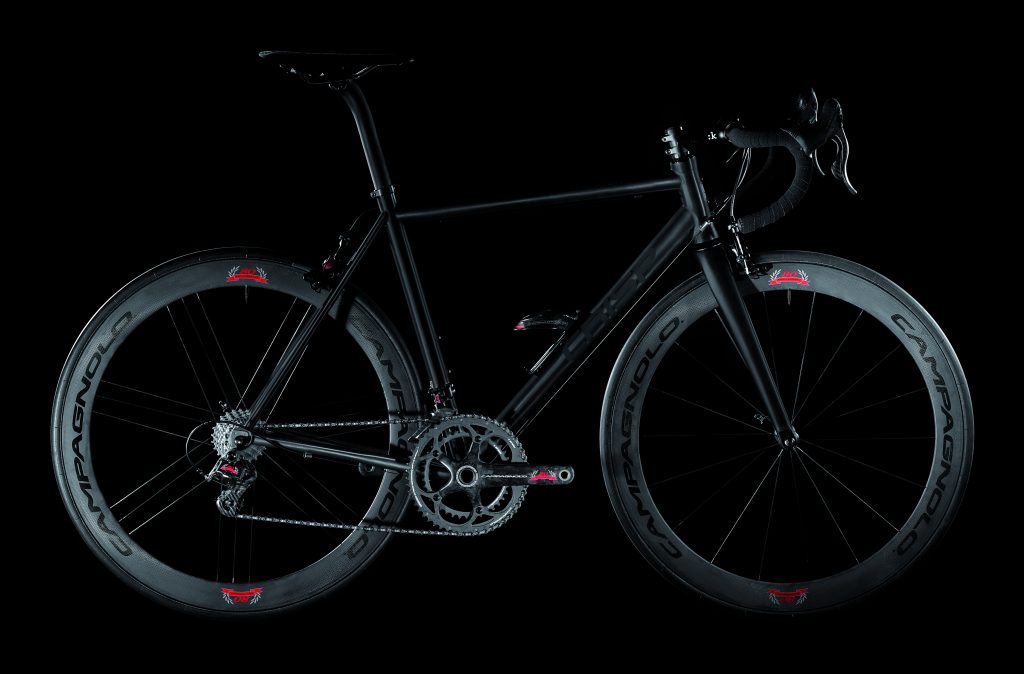 This year has been a crazy ride, thus far. I started back in the shop after a great break with family back in Texas. Within days, I was hammered with pneumonia which took me to the mat for almost a month. Three weeks of antibiotics and bed resulted in pain and discomfort that was not so different from the original symptoms I was suffering from with the initial illness.

Getting into the shop was difficult as I was lacking the necessary energy needed to confront the schedule I had left behind before the New Year. I was working on a road frame when I received an email from a contact at Campagnolo. No details were divulged, but just receiving an email from the iconic Italian company made me wonder what was up.  At first, I thought it was an inquiry about my build that was published in BICYCLING MAGAZINE some months prior.What did they want, some machined ti components? A frame for a trade show or GF? So I gave them a call.

When I came to, I got up off the floor and told them I’d be happy to get a frame to them. I was fortunate enough to have a bike in the shop that I had dedicated to display for my walk-in clients. It is the Bristol Road Bike, aka Trebbiano Silk Ti (you can see it here: http://www.flickr.com/photos/16933657@N08/sets/72157629801260395/ ). I usually don’t have frames or bikes lying around as they get snapped up as soon as they are finished. After 10 years of not having a display bike, I figured it was time to keep on in the house. Boy was I glad I made that decision.

I broke down the frame and the next day it was sent out to Campy with some parts that I had on hand: Unpainted Enve fork, Enve bars and seatpost and some other bits. The rest is Campagnolo goodness. I’ve been asked about the color and the frame in the photos below (courtesy of Campagnolo s.r.l.) is raw titanium, satin finish. It has been darkened up a bit to accentuate the parts and highlight the group which is obviously the goal of the campaign. No black anodizing or coloring, just low light, stealth-like photos.

A few weeks later I started getting compliments from distributors from around the world, USA, Malasia, Hong Kong, The Netherlands… I didn’t realize that the distributors had received advance private pdf’s of the new Gruppo, but it was obvious that something was circulating. Campy was nice enough to send me the hi-res photos and some video that was made during the build-up and prep for the photo shoot. I’ve put some links at the bottom of the post.

I hope that gives you some insight into the process. It was a real exciting moment for me and I am humbled and grateful that Campagnolo took the time to consider a small artisan like myself. Pure emotional bliss for a framebuilder.

If you want to see the project in the flesh, the complete bike will be on display at the Grand Fondo Campagnolo in NY, then the Maratona des Dolomites. Then it will make its way back for the Giro finish in Vicenza and then down to Roma for the Gran Fondo Campagnolo in October. Getting around is an understatement…now..all i need is a new showroom display bike…  🙂

Here’s the Campagnolo video, behind the scenes:

and some hi-res shots from the portfolio: HERE